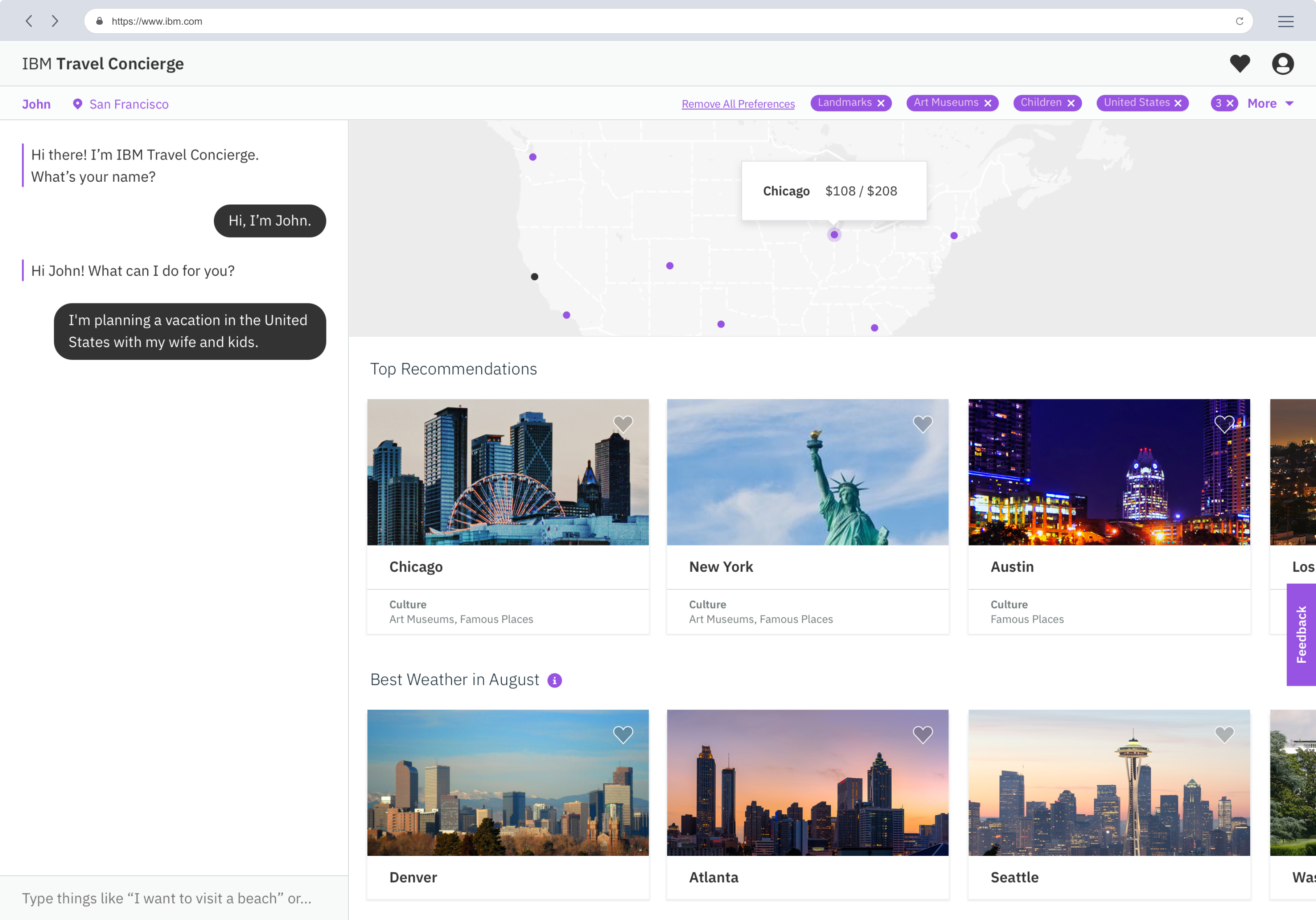 In early 2016, my team and I met with a number of different airlines to understand challenges they faced in maintaining business and being of better service to their customers. Many of them who were more consumer-facing felt that they were in danger of becoming irrelevant due to the amount of disruption that’s occurred in the travel business. Throughout these meetings, a common theme emerged: in the age of the automated travel agent, how do we inspire our users to visit a destination they had never seen before?

User research revealed that their customers wanted better recommendations and that they actually missed the ease of working with travel agents. We knew that in order to meet these needs in an increasingly AI-driven landscape, a solution had to be first and foremost personalized to every user, easy to understand and ultimately human-like in its experience—just like working with a travel agent.

My team at IBM Research and I ran a number of Design Thinking ideation workshops with various airlines in order to determine how to meet their needs. Many of the airlines we met with had collected a variety of qualitative and quantitative data from users, which accelerated the process of uncovering a solution. Users wanted to go on family vacations, weekend getaways and romantic trips but didn’t know how to find places that would match their criteria and personalities. To top it off, when they threw in the caveat of budget, the result often led to feelings of overwhelm.

Stakeholders from airlines were intrigued by the capabilities of new technologies, primarily chatbots and conversational assistants. Realizing that texting has become such a dominant mode of interaction, they were intrigued as to how to incorporate it into the solution.

Taking all of this information, my team and I began to synthesize a result that incorporated our knowledge of Conversation Analysis as well as User Experience Design. We embarked on a solution that would incorporate a conversational agent with a vivid, image-driven destination-shopping experience. As users engaged in dialogue, recommendations would be refreshed and targeted specifically to the preferences and characteristics of them.

Being a first-of-a-kind solution, IBM Travel Concierge involved managing multiple technical teams and business units. We closely aligned with our Proof-of-Concept client, the IBM Sales team and our Research team. Managing all expectations from a design standpoint was not a trivial task. It involved recurring check-ins and playbacks with stakeholders that fell in tandem with Design & Agile Sprints. We instilled the approach wherein every design decision fell back on research. This allowed for every conversation to be grounded on as much information from users as possible, which alleviated team members’ needs to base decisions off of personal preference.

From a craft standpoint, devising the UX was a challenge. The application hinged on the IBM Watson Assistant platform, and the conversational component relied on a back-end database and recommendation engine. Ultimately this meant understanding each technical call and how that might impact the UX. With every new preference gleaned from user conversation, recommendations on the main UI would evolve to reflect new information. As a result, providing ample user feedback became critical and failing to do so would translate to a poor user experience.

The first working prototype of IBM Travel Concierge was revealed at the IBM Think event in Las Vegas in 2018. We collaborated with United Airlines to produce a fully functioning working prototype. The experience hinged on a chat window being the primary mode of interaction, accompanied by a traditional shopping experience. As users talked to the agent like they would to any travel agent, the agent would start to capture preferences and characteristics in order to build out a profile. Furthermore, while chatting, recommendations would appear on the other half of the screen, allowing users to explore photos and read more information. From a UX standpoint, my team and I had to manage expectations: how would the experience handshake from conversation to traditional GUI? We devised the solution wherein conversational triggers would update the GUI and GUI interactions would cause the agent to respond to them. 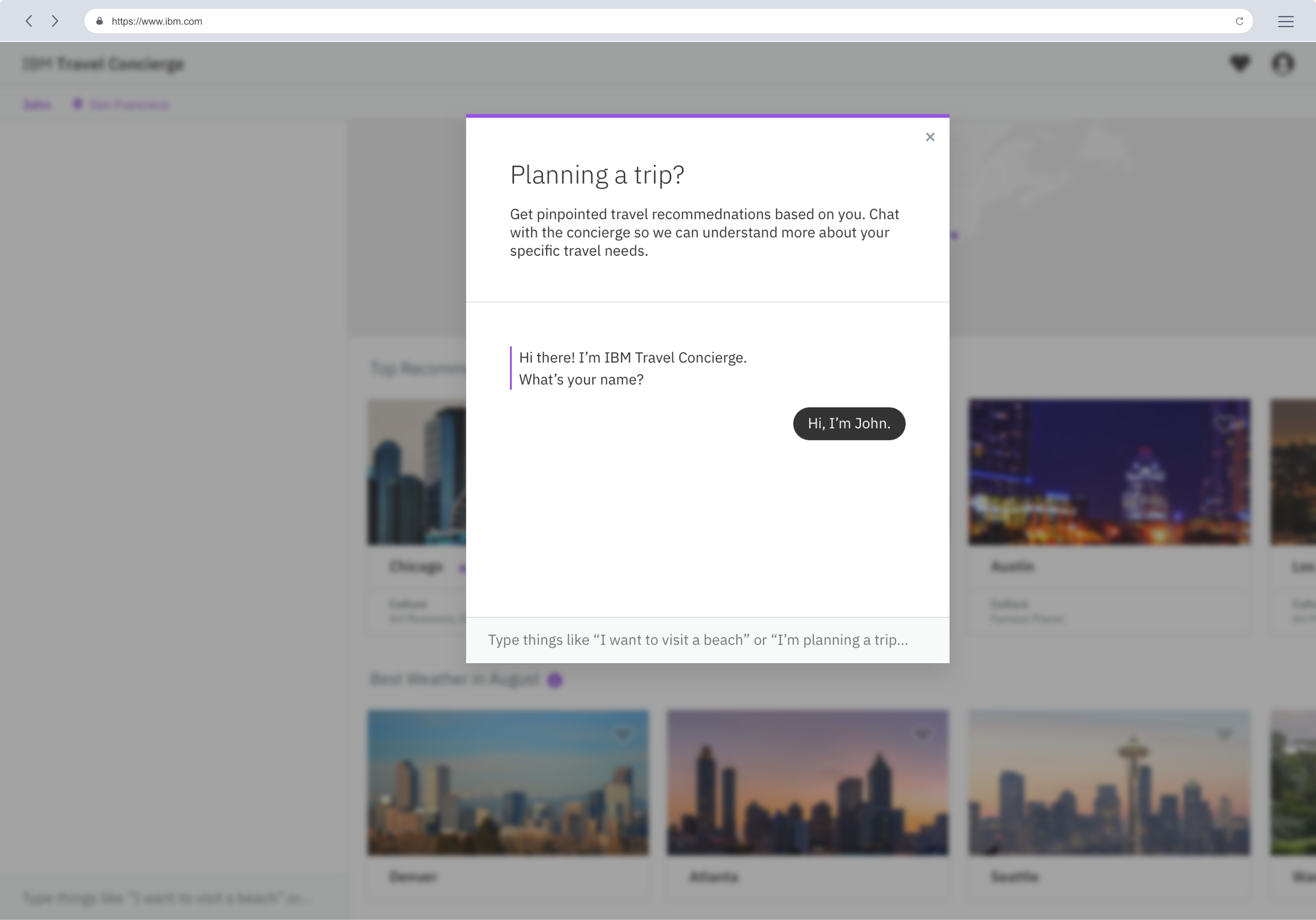 In order to encourage interaction through conversation, the first interaction a user has of the prototype is mediated through a modal that nudges the user to chat. 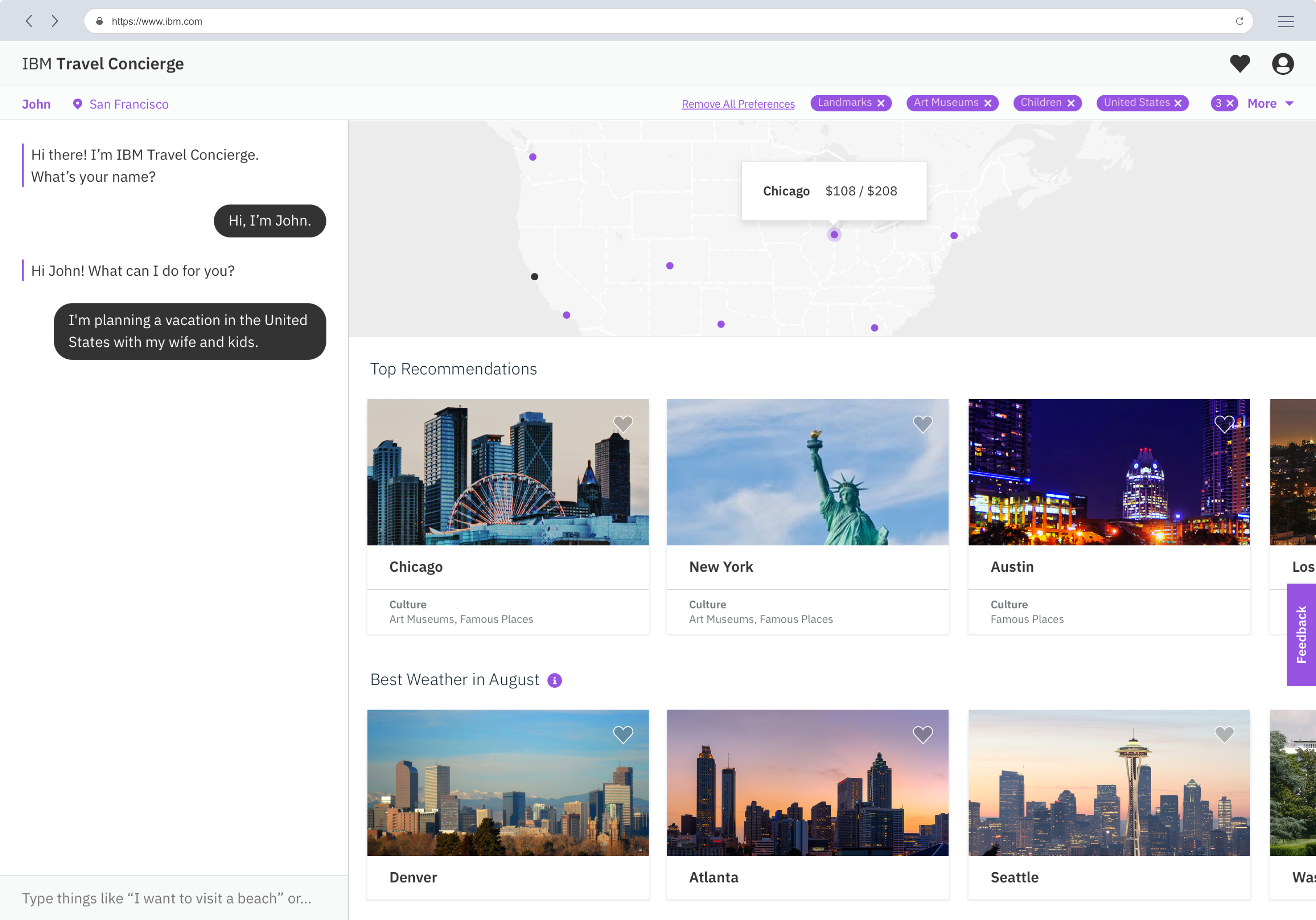 Upon iteracting, the modal dismisses itself and the resulting experience provides two avenues for interaction: one through conversation and the other through a more conventional user experience. 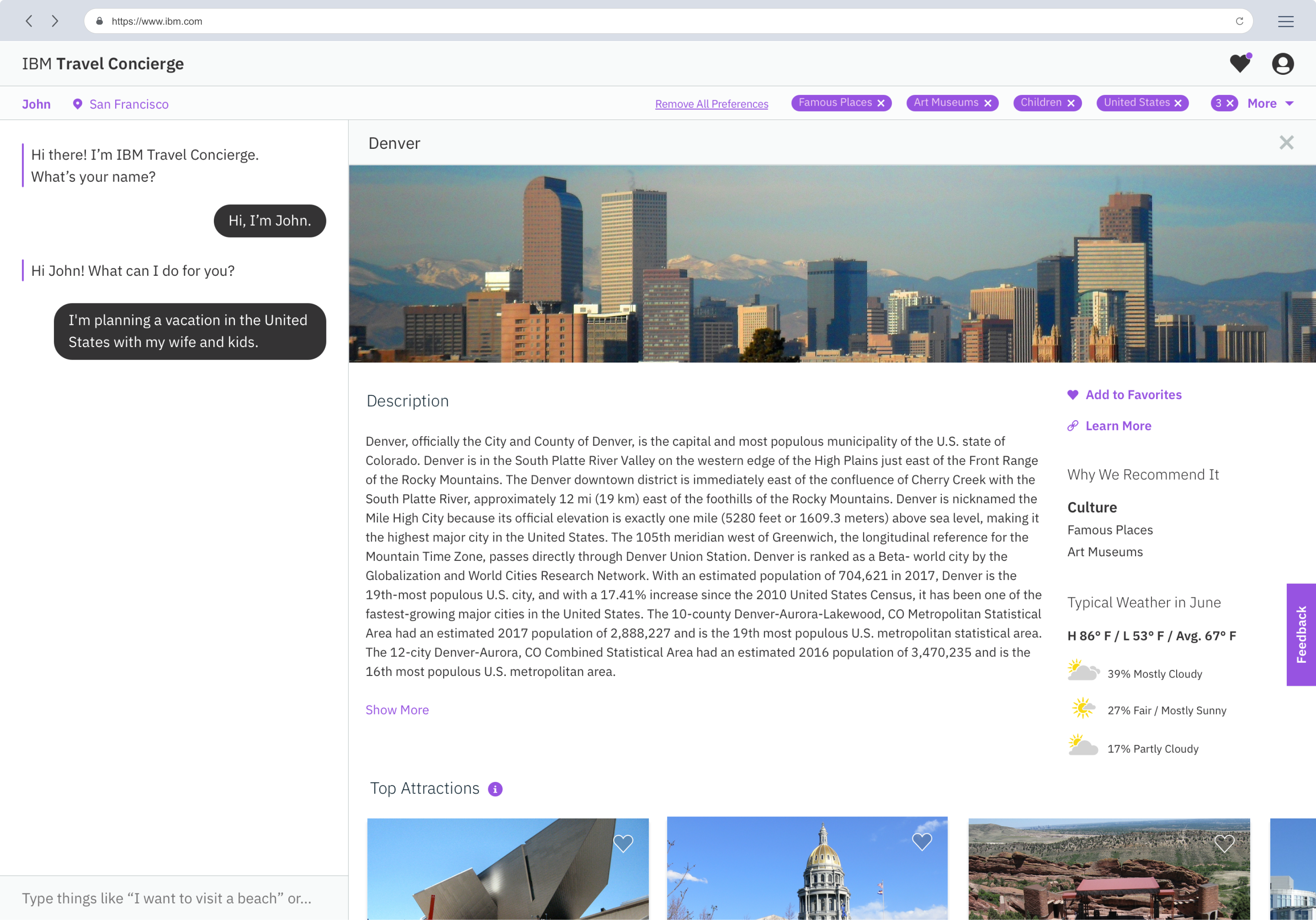 After the user interacts with a destination card, they have the ability to find more about the locale.

Many of the data elements on this screen, such as weather predictions and attraction information, are powered through machine learning, particularly collaborative filtering. 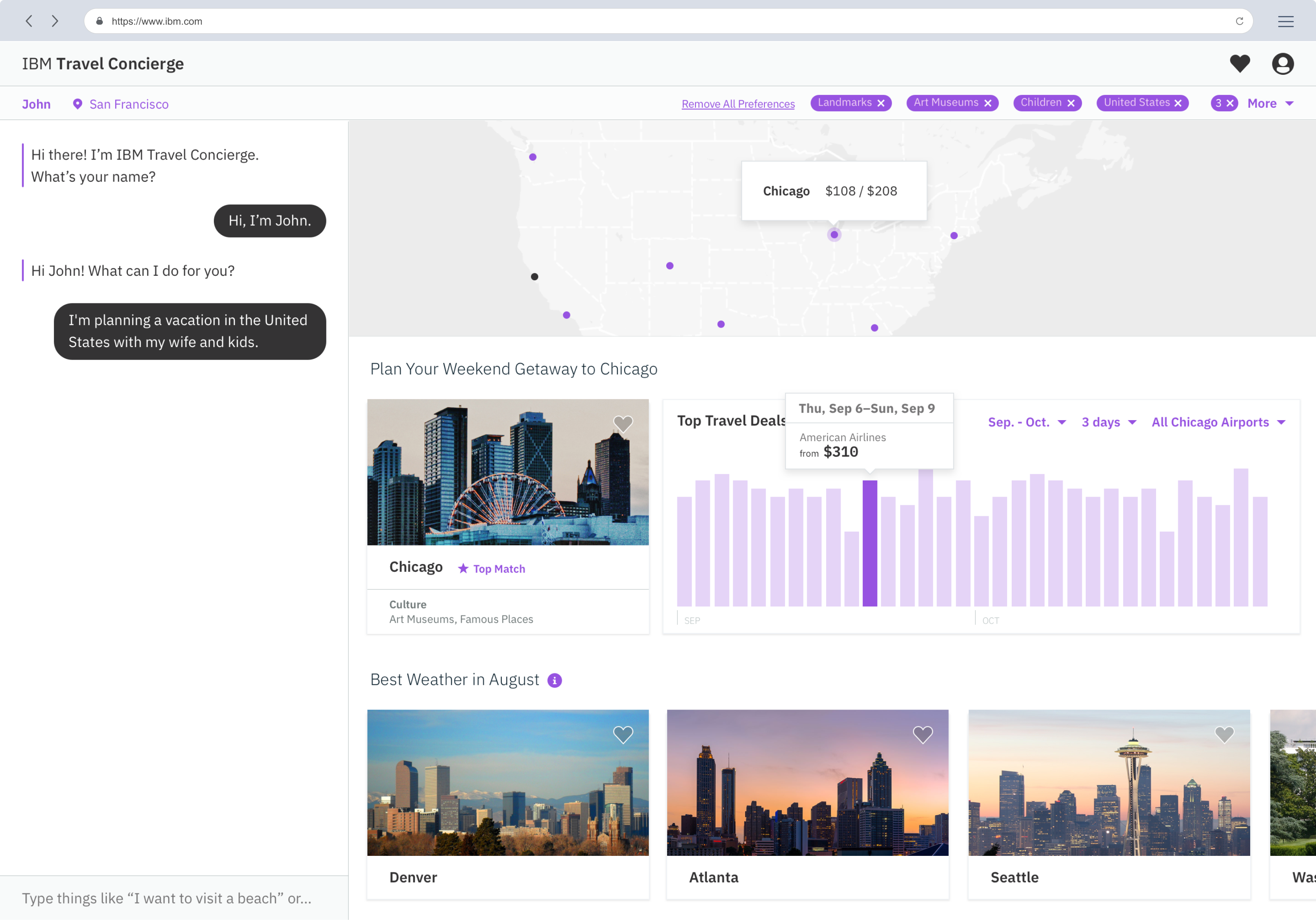 Whether the user decides to advance the experience through conversation or by more conventional interaction paradigms, the end goal is to book a flight.

When the user reaches this step, they will be presented with a bar chart that shows them a breakdown of price points for different dates of interest.

The prototype was successfully delivered to our first set of pilot clients in mid-2018. After this time, the United's usability and development teams took on the work of running alpha testing with a select group of their MileagePlus customers. Despite having left shortly after this project was handed off, the client signed on for additional work to be completed on this alpha release pending testing results. All that said, early qualitative feedback from customers has been positive and our NPS score tracked in the low 60s with this select group of testing customers.